AnyConnect: Configure Basic SSLVPN for IOS Router Headend With the Use of CLI

This document describes the basic configuration of a Cisco IOS Router as an AnyConnect SSLVPN Headend.

Cisco recommends that you have knowledge of these topics:

The information in this document is based on these software and hardware versions:

For RTU licensing, an evaluation license will be enabled when the first webvpn feature is configured (that is, webvpn gateway GATEWAY1) and the End User License Agreement (EULA) has been accepted. After 60 days, this evaluation license becomes a permanent license. These licenses are honor based and require a paper license to be purchased in order to use the feature. Additionally, rather than being limited to a certain number of uses, the RTU allow for the maximum number of simultaneous connections which the router platform can support concurrently.

These bugs IDs resulted in significant features or fixes for AnyConnect:

The first step when AnyConnect is configured on an IOS Router headend is to confirm that the license has been correctly installed (if applicable) and enabled. Refer to the licensing information in the previous section for the licensing specifics on different versions. It depends on the version of code and platform whether show license lists an SSL_VPN or securityk9 license. Regardless of the version and license, the EULA will need to be accepted and the license will show as Active.

AnyConnect packages can be obtained through the AnyConnect Secure Mobility Client section of the Cisco Software Downloads website. While there are many options available, the packages which are to be installed on the headend will be labeled with the operating system and Head-end deployment (PKG). AnyConnect packages are currently available for these operating system platforms: Windows, Mac OS X, Linux (32-bit), and Linux 64-bit. Note that for Linux, there are both 32 and 64-bit packages. Each operating system requires the proper package to be installed on the headend in order for connections to be permitted.

Once the AnyConnect package has been downloaded, it can be uploaded to the Router's flash with the copy command via TFTP, FTP, SCP, or a few other options. Here is an example:

On versions of code which were released before 15.2(1)T, the command to install the PKG is slightly different.

Step 3. Enable the http Server on the Router

When you configure SSL or any feature which implements Public Key Infrastructure (PKI) and digital certificates, a Rivest-Shamir-Adleman (RSA) keypair is required for the signing of the certificate. The follow command will generate an RSA keypair which will then be used when the self-signed PKI certificate is generated. When you make use of a modulus of 2048 bits, it is not a requirement, it is recommended to use the largest modulus available for enhanced security and compatibility with the AnyConnect client machines. To use a descriptive label is also recommended as it will allow for ease of key management. The key generation can be confirmed with the show crypto key mypubkey rsa command.

Note: As there are many security risks associated with making RSA keys exportable, the recommended practice is to ensure keys are configured to be not exportable which is the default. The risks that are involved when you make the RSA keys exportable are discussed in the this document: Deploying RSA Keys Within a PKI.

Once the RSA keypair has successfully been generated, a PKI trustpoint must be configured with our router's information and RSA keypair. The Common Name (CN) in the Subject-Name should be configured with the IP address or Full Qualified Domain Name (FQDN) which users use to connect to the AnyConnect gateway; in this example, the clients use the FQDN of fdenofa-SSLVPN.cisco.com when they attempt to connect. While it is not mandatory, when you correctly enter in the CN, it helps reduce the number of certificate errors that are prompted at login.

Note: Rather than using a self-signed certificate generated by the router, it is possible to use a certificate issued by a third-party CA. This can be done via a few different methods as discussed in this document: Configuring Certificate Enrollment for a PKI.

After the trustpoint has been correctly defined, the router must generate the certificate by using the crypto pki enroll command. With this process, it is possible to specify a few other parameters such as serial number and IP address. However, this is not required. The certificate generation can be confirmed with the show crypto pki certificates command.

While it is possible to use an external Authentication, Authorization, and Accounting (AAA) server, for this example local authentication is used. These commands will create a user name VPNUSER and also create an AAA authentication list named SSLVPN_AAA.

By default, AnyConnect will operate in full tunnel mode which means that any traffic generated by the client machine will be sent across the tunnel. As this is typically not desirable, it is possible to configure an Access Control List (ACL) which then defines traffic which should or should not be sent across the tunnel. As with other ACL implementations, the implicit deny at the end eliminates the need for an explicit deny; therefore, it is only necessary to configure permit statements for the traffic which should be tunneled.

Dynamic VTIsprovide an on-demand separate Virtual-Access interface for each VPN session that allows highly secure and scalable connectivity for remote-access VPNs. The DVTI technology replaces dynamic crypto maps and the dynamic hub-and-spoke method that helps establish tunnels.Because DVTIs function like any other real interface they allow for more complex Remote Accesss deployment because they support QoS, firewall, per-user attribtues and other security services as soon as the tunnel is active.

The WebVPN Context and Group Policy define some additional parameters which will be used for the AnyConnect client connection. For a basic AnyConnect configuration, the Context simply serves as a mechanism used to call the default Group Policy which will be used for AnyConnect. However, the Context can be used to further customize the WebVPN splash page and WebVPN operation. In the defined Policy Group, the SSLVPN_AAA list is configured as the AAA authentication list which the users are a member of. The functions svc-enabled command is the piece of configuration which allows users to connect with the AnyConnect SSL VPN Client rather than just WebVPN through a browser. Lastly, the additional SVC commands define parameters which are relevant only to SVC connections: svc address-pool tells the Gateway to handout addresses in the ACPool to the clients, svc split include defines the split tunnel policy per ACL 1 defined above, and svc dns-server defines the DNS server which will be used for domain name resolution. With this configuration, all DNS queries will be sent to the specified DNS server. The address which is received in the query response will dictate whether or not the traffic is sent across the tunnel.

Unlike on ASAs, Cisco IOS does not have a built-in GUI interface that can assist admins in creating the client profile. The AnyConnect client profile needs to be created/edited separately with the Stand-Alone Profile Editor.

Follow these steps to have the Router deploy the profile:

3. Under the context, use this command to link the profile to that context:

Note: Use the Command Lookup Tool (registered customers only) in order to obtain more information on the commands used in this section.

Once the configuration is complete, when you access the Gateway address and port via browser, it will return to the WebVPN splash page. 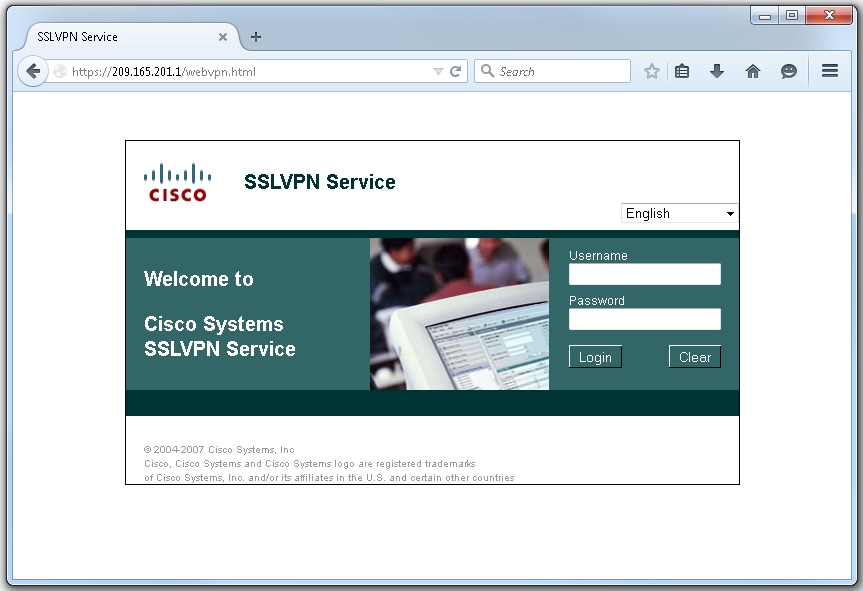 After you log in, the WebVPN home page is displayed. From here, click Tunnel Connection (AnyConnect). When Internet Explorer is used, ActiveX is utilized to push down and install the AnyConnect client. If it is not detected, Java will be used instead. All other browsers use Java immediately. 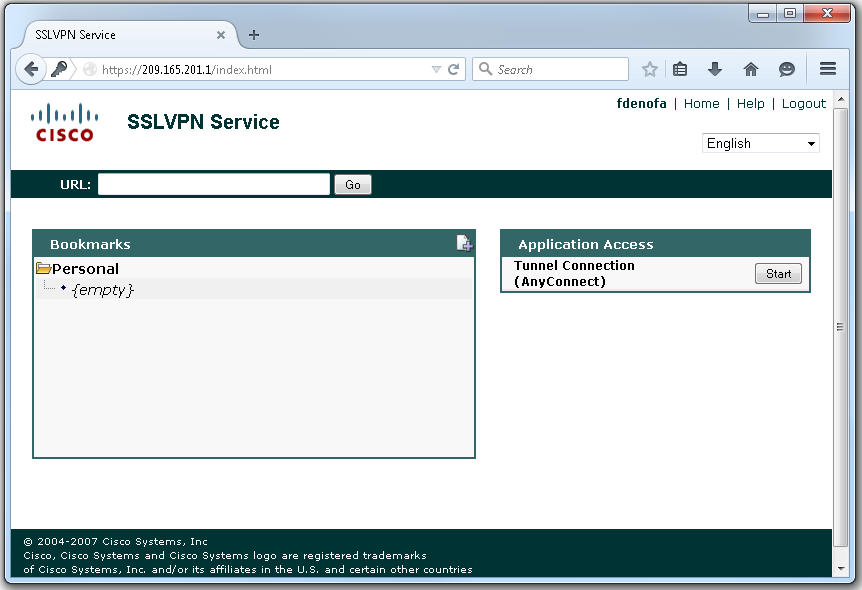 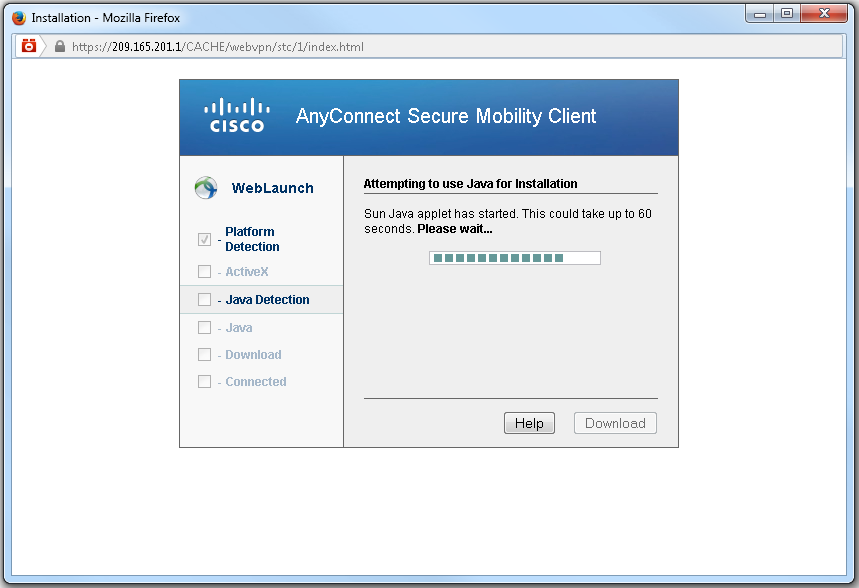